The ground-breaking anti-piracy deal signed by Russia-based content and Internet platforms in 2018 will not be written into local law any time soon. The agreement, which sees search engines voluntarily delete allegedly-infringing links, was supposed to be formalized in recent months but in the face of complexities and parliament being tied up with other things, will now be extended until 2021.

When leading content companies and distributors plus Yandex, Rambler Group, Mail.Ru Group, vKontakte, and RuTube signed up to a landmark anti-piracy memorandum in 2018, new ground was broken in Russia.

Assisted by the creation of a centralized database of allegedly-infringing content, Internet platforms agreed to voluntarily query the resource in near real-time before deleting content from their search indexes. The plan was to make pirated content harder for users to find and within months, hundreds of thousands of links were being purged.

PortalRoms, a popular index for ROM and emulators for a wide range of gaming systems, has disappeared without trace. Up until a few days ago the site was servicing more four million visitors per month with links to download content via torrents. However, after domain issues hit the site last October, history may now be repeating itself for the ten-year-old site.

In Internet ‘piracy’ years, PortalRoms.com is pretty old domain, having first appeared as a very basic ROM download site way back in 2004, possibly even earlier.

Over the years it has undergone various transformations and possibly ownership changes too. Its now-dormant Twitter account was created back in 2010 but behind the scenes and after fairly slow initial growth, the last decade saw the site grow negligible traffic to become a decent-sized ROM, retro, and emulator player.

Up until just a few days ago, users of PortalRoms – who between them have b...

This week, one of the most used Popcorn Time forks had its domain name suspended. We later learned that the registrar took this decision based on a US court order. That's nothing out of the ordinary if it wasn't for the fact that the document was clearly falsified. The registrar eventually reversed its decision after questions were asked, but the trouble didn't stop there.

The grounds for the suspension initially remained unclear. However, after asking for clarification, 101domain explained to the site operator that it had received an injunction from a US court.

The injunction in question appeared to have been sent by the Motion Picture Association (MPA). It was signed by a federal judge at the US District Court for the District of Columbia and indeed targeted Popcorntime.sh.

Since the MPA had gone after various Popcorn Time forks in the past, this sounded so...

Popular eBook download platform eBookee has lost control of its main .org domain. The suspension was carried out by the Public Domain Registry but it's not yet clear what specific issue caused the domain to be suspended. However, since the site is a regular target for rightsholders, particularly those in the publishing industry, copyright woes seem a likely candidate.

Alongside the mass uptake of digital readers such as Kindles, phones and tablets, plus a relatively small filesize, downloading of eBook and magazine content has gained in popularity over recent years.

There are plenty of sites catering to this popular niche but in common with platforms specializing in other areas, a handful of dedicated sites have found their way onto the preferred lists of many pirates.

One of those is eBookee, a download platform that doesn’t appear to carry content itself but indexes content hosted on other sites, notably file-hosting services. Indee...

Infamous pirate release group Hive-CM8 is accusing rival group TOPKEK of putting people in danger by leaving watermarks and tracers in its recent releases. If true, this could spell trouble for those involved. Screener leaks are considered to be major breaches by the movie industry, which are severe enough to get the FBI involved.

People who operate or even get involved with pirate release groups take major risks. Those who release screeners of unreleased movies up the ante further still.

The movie screeners that are sent out to film insiders to be considered for various awards come with all sorts of protection mechanisms. These include visible and invisible watermarks as well as other tracers that can lead directly to the source.

These extensive protections are supposed to deter people from leaking screeners. This is important, as some of the films have yet to air in theaters. For example, ‘Color O...

PopcornTime.sh, one of the most popular Popcorn Time applications, has lost control over its domain name. The registrar suspended the domain following a complaint, according to a Popcorn Time spokesperson. Further details were not provided but the problems prompted the popular app to relocate to a new home for the time being.

Half a decade ago, Popcorn Time was the first application to bridge the gap between torrenting and streaming.

The software amassed millions of users by offering an easy-to-use Netflix-style interface, providing access to the latest pirated movies and TV-shows.

In recent years many other pirate streaming alternatives have outgrown Popcorn Time in terms of popularity. However, the various forks of the app still have a significant user base.

One of the most popular ones is Popcorntime.sh. Like all other forks, it’s not linked to the original developers, who have lon...

An Italian court has ordered 'preventative measures' that requires the websites of 15 'pirate' IPTV providers to be blocked in the country. The complaint was filed by top Italian soccer league Serie A after the IPTV providers reportedly broadcast live matches without permission. How effective the blocks will be remain to be seen, however.

In common with several top football leagues around Europe, Italy’s Serie A has an ongoing problem with piracy of its live broadcasts.

Sites with embedded streaming players regularly show Serie A matches but perhaps the biggest threat is posed by unlicensed IPTV services. These offer subscription packages that closely mimic and can even outdo those delivered by Serie A’s official broadcasting partners.

This has provoked a range of anti-piracy actions, such as the one now being reported by anti-piracy group FAPAV (Federazione Anti-Pirateria Audiovisiva). Following a ...

The much-heralded return of Conor McGregor this weekend ended in a stunning 40-second victory for the UFC's biggest star. The event also resulted in one of the biggest piracy fails in recent memory when a Twitch user broadcasting the PPV event illegally managed to expose details of his personal life to more than 130,000 people. This incident and others like it raise questions not only for amateur pirates but also the UFC.

Conor McGregor is without doubt the biggest star the world of mixed martial arts has ever seen. Often controversial but always entertaining, the Irishman’s name on a pay-per-view event represents a financial windfall for everyone involved.

As a result, any card displaying McGregor’s name as one half of the main event attracts huge attention and last Saturday’s UFC 246 was no different. Taking place in a sold-out T-Mobile Arena in Las Vegas and broadcast live on PPV, millions of people parted with money to enjoy the extravaganza. Of course, countless thousands didn&#... 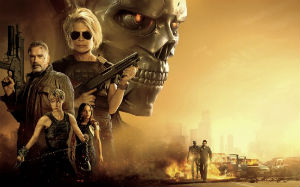 The top 10 most downloaded movies on BitTorrent are in again. 'Joker' tops the chart this week, followed by ‘Maleficent: Mistress of Evil'. 'Countdown' completes the top three.

This week we have four newcomers in our chart.

Terminator: Dark Fate is the most downloaded movie.

The data for our weekly download chart is estimated by TorrentFreak, and is for informational and educational reference only. All the movies in the list are Web-DL/Webrip/HDRip/BDrip/DVDrip unless stated otherwise.

RSS feed for the articles of the recent weekly movie download charts.

Pirate streaming giant 'IndoXXI,' stopped offering pirated movies at the start of the year. This left millions of Indonesian pirates without their favorite site. However, according to anti-piracy group AVIA, many others have jumped in to fill this gap. Industry insiders are now calling on the government there to consider criminal prosecutions.

According to a recent survey, nearly a third of all Indonesians have accessed streaming piracy websites or torrent sites.

In recent months, Indonesia’s Information and Communications Ministry has worked hard to address the country’s piracy problem. Among other things, the Government has ordered ISPs to block more than 1,000 domain names.

The main target of these efforts was streaming giant ‘IndoXXI.’ With millions of daily visitors, it was listed among the 25 most-visited sites in the country up until last month.